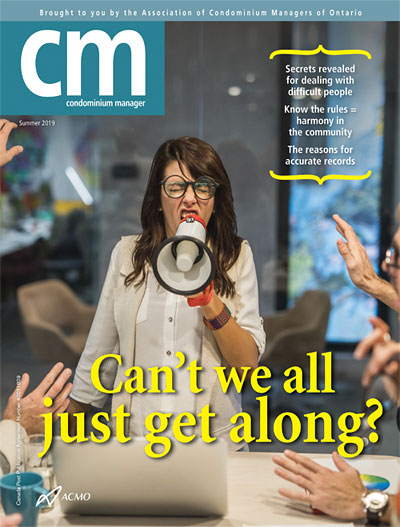 A Day in the Life:

The Snake and the Candle

We’re pleased to launch a new series of occasional articles that highlight some of the funnier moments in the lives of our condominium managers. Special thanks are extended to Lori Dunlop, RCM for sharing one of her favourite tales. If you have a humorous story you’d like to share with CM readers please send this to editor@acmo.org.

As a fledgling property manager, I had the privilege of working with an amazing superintendent, Jeanne, who had not only people smarts but mechanical smarts as well.

One day our senior property manager was “kind” enough to drop off a mechanical snake. He explained this was to be used so that plumbing expenses for simple kitchen and bathroom blockages could be eliminated, as such often occurred in this building. He carefully explained and demonstrated to both of us, how to properly remove the p-trap in the kitchen and bathroom sinks, then use the snake to clear the problem. Looked easy enough – when he did it.

Not long afterwards, a call came from a resident sheepishly admitting that she poured melted candle wax down the kitchen sink the previous night (there may have been alcohol involved). This admission did not bother us in the least, we embraced the challenge because we were trained professionals. Jeanne whipped out the required tools and quickly took the p-trap off. Then, as instructed, proceeded to manipulate the snake into the clogged drain pipe. I stood behind, supervising and offering words of encouragement. Before long, she struck candle wax gold. Working diligently (or so she thought) she loosened the blockage and began to wind the snake backward. Small bits of red candle were evident during the rewind.

Near busting with pride and confidence we saw the finish line approaching. Then, it happened.

The recoiled snake came loose from the winding gear and proceeded to completely unwind, like a slinky gone wild making a whoop sound and flicking bits of red candle wax over every inch of the resident’s kitchen, floors, ceiling, cupboards. (It was a big candle we were told.) In all honesty, it seemed to happen in slow motion, as we stood there watching the scene unfold before us mouths agape, until we were overcome by the sheer shock and disbelief of what had occurred. Then we were overcome with uncontrollable laughter and tears.

After making somewhat insincere apologies to the resident for the mess, we found the water was running, so mission accomplished! We took the full extended and discombobulated snake and left – still laughing.

We put the broken snake in to a bag and the next day when our senior property manager came by he asked what happened to the brand new snake. When we told him, he just shook his head in disbelief.

Jeanne is still the superintendent at this building almost 25 years later and we can still laugh over this every time we get together.